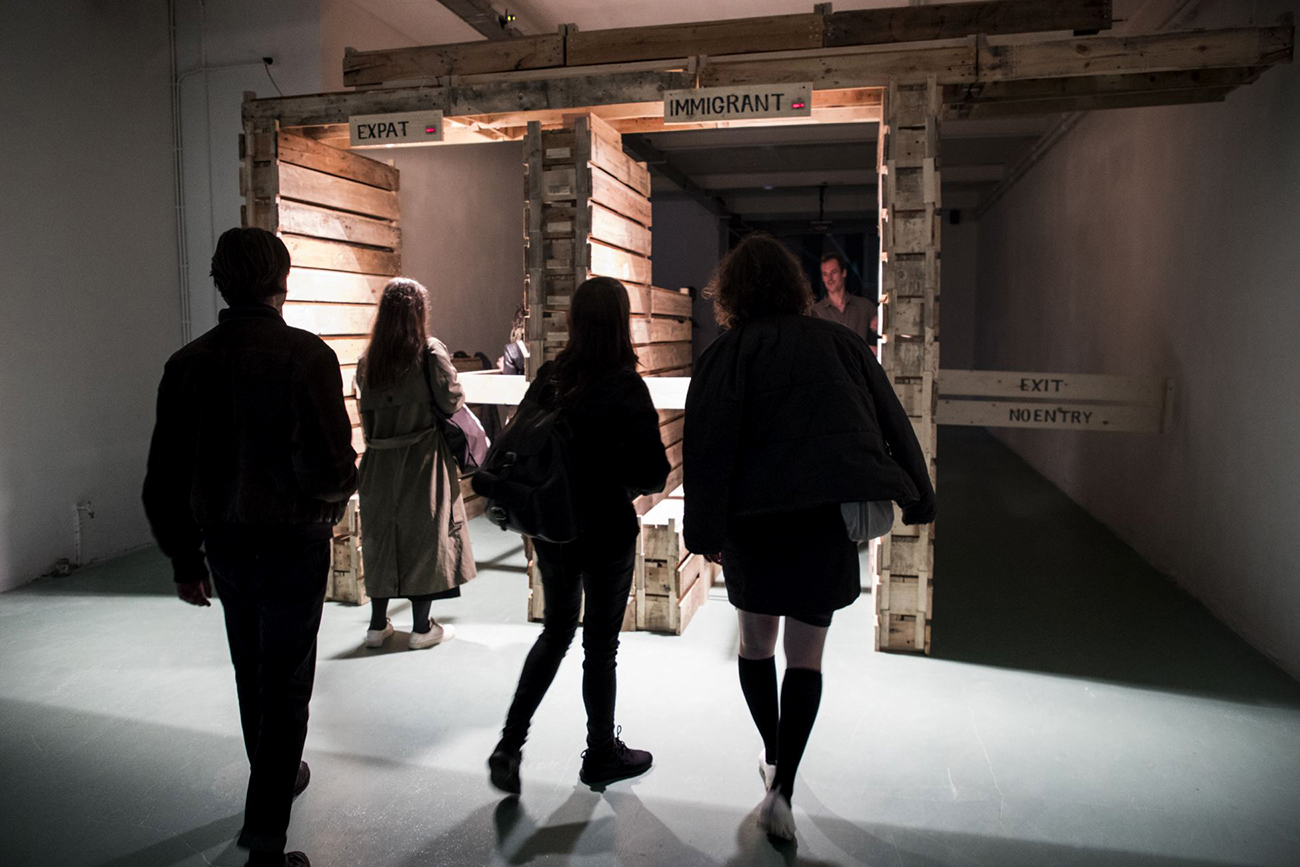 “Expat Immigrant Gate” was an interactive sculpture which functioned as the entrance to the exhibition “Ideology Meets Implementation”. The exhibition was held at W139 in Amsterdam between 13 October and 19 November 2017.
The initial idea of the gate was to create a situation in which the visitor has to select to enter the space either as an immigrant or as an expat. The aim was to evaluate how many people would empathize with each of the terms. The two revolving doors were equipped with counter sensors that would count the number of entrances.

The gate was additionally used for means of crowd separation during the exhibition. One example is with the work of Ehsan Fardjadniya in which he adopted a play by Berlot Brecht called “Pointed Heads and Rounded Heads”. Depending on which entrance the visitor would enter from, they would receive stamps on their hands marked either as a triangle for the pointed head, or a circle for the rounded head. During the different sessions of the performance, the behavior of the actors toward the visitors would depend on which stamp the visitor has.

Also, the choice of material of wooden ammunition boxes does relate with the work of Fardjadniya, in which he held the “Non-Fascist House”, at the exhibition. These wooden boxes were used as the structure of the exhibition and in the design of the whole exhibition. In the city of JAHA, where the play was happening, these boxes were made and capitalized as means of power control.

The western terminology dominates our global definitions. “Expat” and “Immigrant” are among those words which really do separate people depending on their social situations. One case of separation here is about the income. The specialist “foreigner” who works abroad, and earns a certain amount of money which is higher than medium, will be called an expatriate. This is the default definition of the word. However, in many cases, even if the foreigner does earn a certain amount of high income, they would still be called an immigrant, due to their appearances, or where they are coming from. So the definition does not really give a clear image and is rather racially charged. The work tries to focus both on the economic side, and the racial side of the terminology of expat and immigrant.

By the end of the exhibition, the counters marked 3867 of entrances for immigrant, and 1595 for expat.