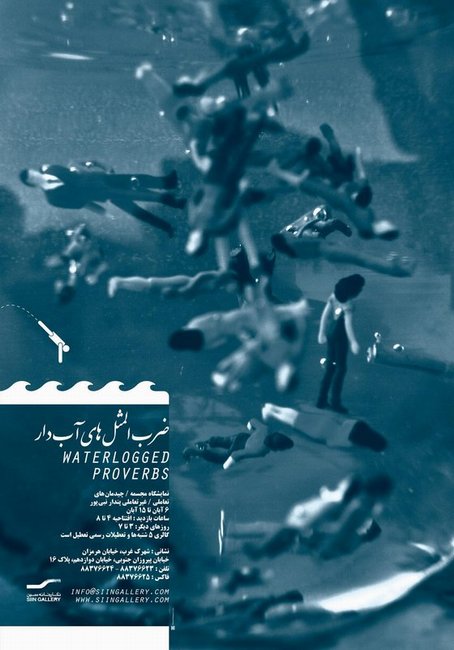 Proverbs are important in the Persian language as metaphoric connotations are often visible in Persian language and culture. This set of works contains installations which try to illustrate certain proverbs which show the issues lingering on Iranian society’s collective mind. This set of works has been influenced by the events of 2009 until 2011 in Iran and has social and political roots. My reason for usage of “Waterlogged” term is to first explain the usage of water itself in most of the works as an element of interaction, and secondly to stress about the stinginess and the boldness of artworks' aims which are trying to be as metaphoric as proverbs themselves.

Waterlogged proverbs / ضرب‌المثل‌های آبدار was a solo exhibition held in Siin Gallery in Tehran from 27 October until 5 November 2011. While at the same time the piece “Water will not even slide over water” from the series was duplicated and presented in 6th National Sculpture Biennial in Niavaran Cultural Complex in Tehran at the same time and it won the prize for ”under 35 years old participating artist” category. This project was presented also as the final project of my BFA in sculpture in University on Art, Tehran, February 2011. Later this artwork was sent to  Devi Art Foundation in New Delhi for taking part in an exhibition titled The Elephant in the Dark. Later, some of the works from these series traveled to more places.

Below you will find the pictures of the installations, some descriptions about the proverbs and some links to videos showing how do the works interact.

How does it interact?  Watch a video here >
There is a bucket full of water below, with a bowl within. The viewer fills out the bowl with water and then will pour the water into the pit embedded in the surface of the artwork. The water will slowly penetrate under the castle and will be poured back into the bucket through the little pipe embedded in the front.

The lake is muddy from the source / آب از سرچشمه گل آلود است
This proverb expresses that when things will not get better, it may be the case that the deal is corrupted from the beginning. It means the whole thing is tainted from the high above and since this is happening, the common have to use the muddy water instead of clean water. So the whole community stays sick or unsatisfied.

How does it interact? Watch a video here >
There is a button to push, in the front side of the artwork when the viewer pushes it, Brownish muddy water will start to flow in the river, it comes all the way down from the castle located uptown and goes through the city.

There is water in the jug, and we thirsty people keep seeking around / آب در کوزه و ما تشنه لبان می‌گردیم
It means while you were trying so hard to accomplish something, or looked for something in four corners of the world, what you were seeking was at your reach all this time and you did not know.

How does it interact? Watch a video here >
There are some small motors under the round little stage with dummies on it, which goes around with a crazy speed, and there is water in the jug, which raises in the air like a fountain that represents a clear and lovely image of water. It also makes gurgle sounds. This work also works by pushing a button. 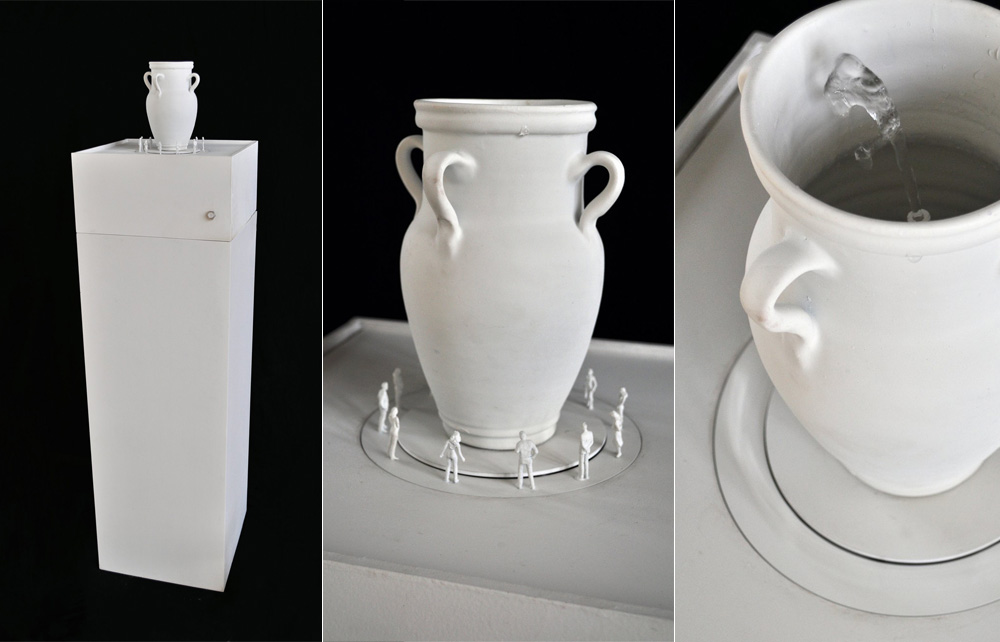 The cradle is wet and the baby is gone / جا تر است و بچه نیست
It means that what is done is done and “they” finally did what they were up to do. It also means that someone has done some damage to serve their own benefit secretly, and now it has become conspicuous. There is almost a similar idiom in English saying “The fix is in”.

There is a cradle of a baby, which is wet because the baby pissed in it. And then there is the case door that with the groove above looks like the door of an election box. It reminds the controversial presidential election which took place in summer 2009 in Iran.

Water will not even slide over water / آب از آب تکان نمی‌خورد
This proverb is used in the Persian language in order to state a situation which is unstable and silent where nothing happens. Using the “Azadi (freedom)” square’s memorial tower, I tried to express a situation in which everything is ready for the explosion, yet no big change happens.

The scene is aiming to remind the huge demonstration which took place on 15th of July when nearly 4 million people took out to the streets in silence and in this square to protest for their votes after the controversial presidential election of 2009.

Getting one’s own kilim (little carpet) pulled out of the water / گلیم خود از آب بیرون کشیدن
This is an old proverb with the historical background which means, to put one into a test to see if they can gain success in their issues on their own.

There is a little kilim drowned in the water and there is an instruction guide on the artwork, asking the viewer to reach into the water and pull their kilim out of the water. There are two electrodes put in the water, releasing 50 volts of DC electronic power into the water. As the spectators reach their hands into the water, they will feel a weak shock enough to makes them pull their hands out immediately. So no one can pull their kilim out of the water. The amount of the shock is, of course, safe and it is alerted on the instruction that people with heart conditions should not try to do this. 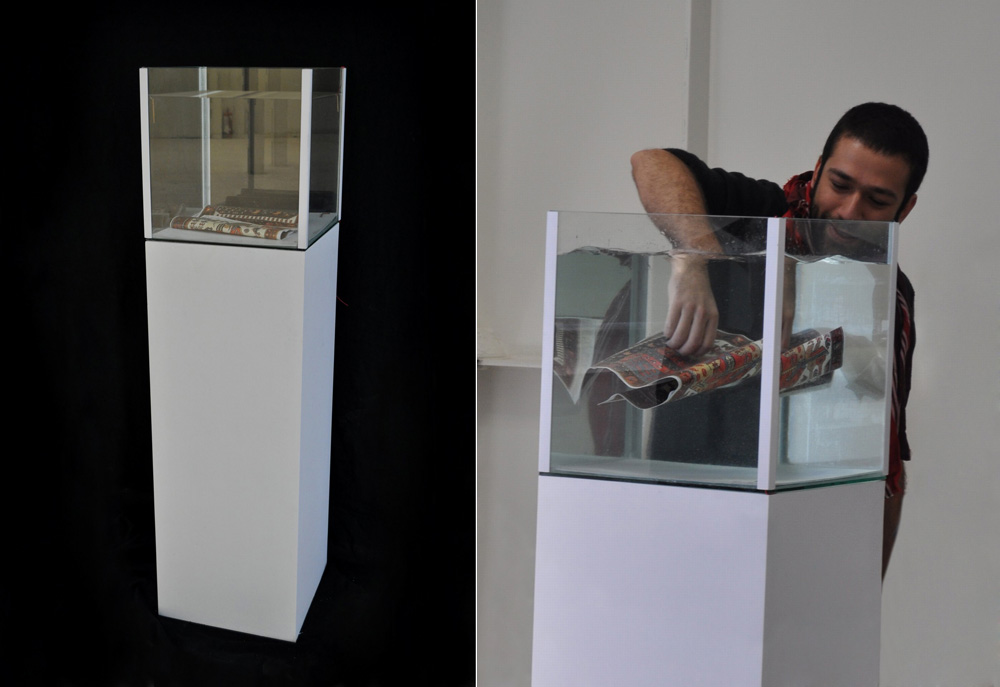 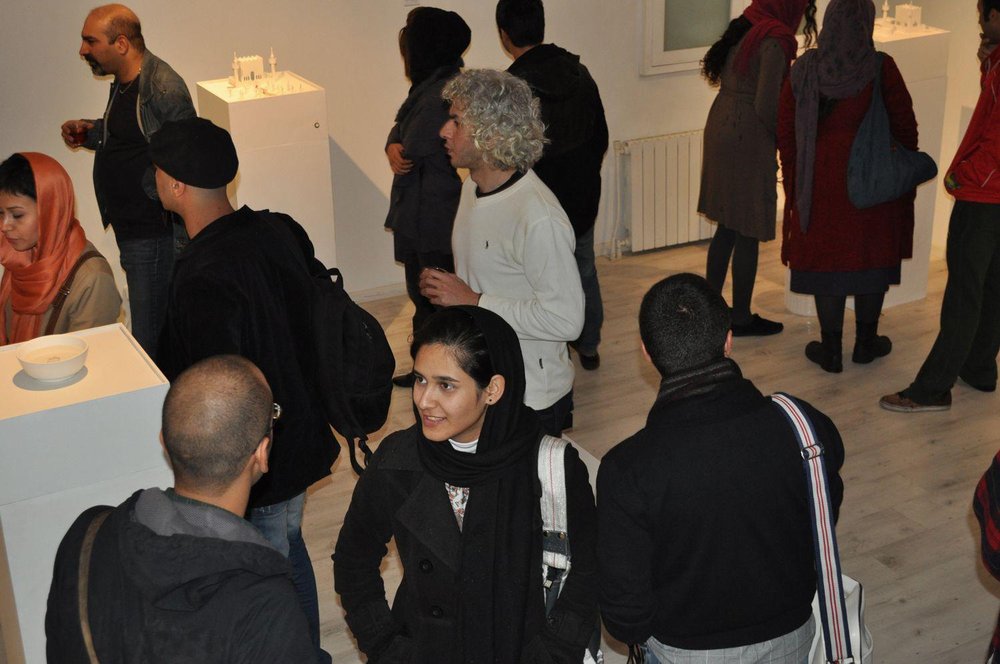 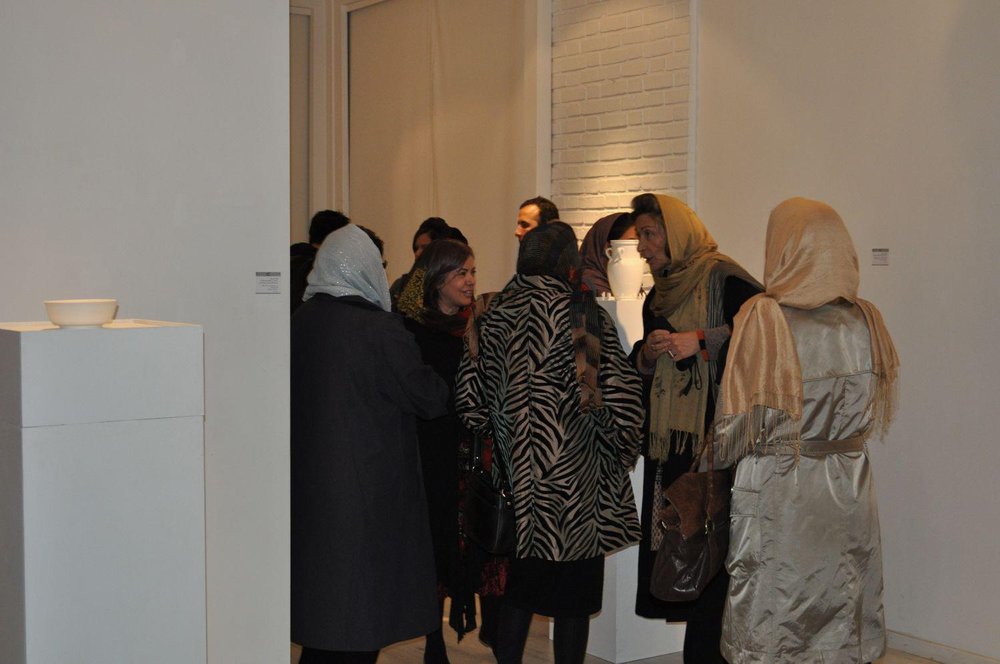 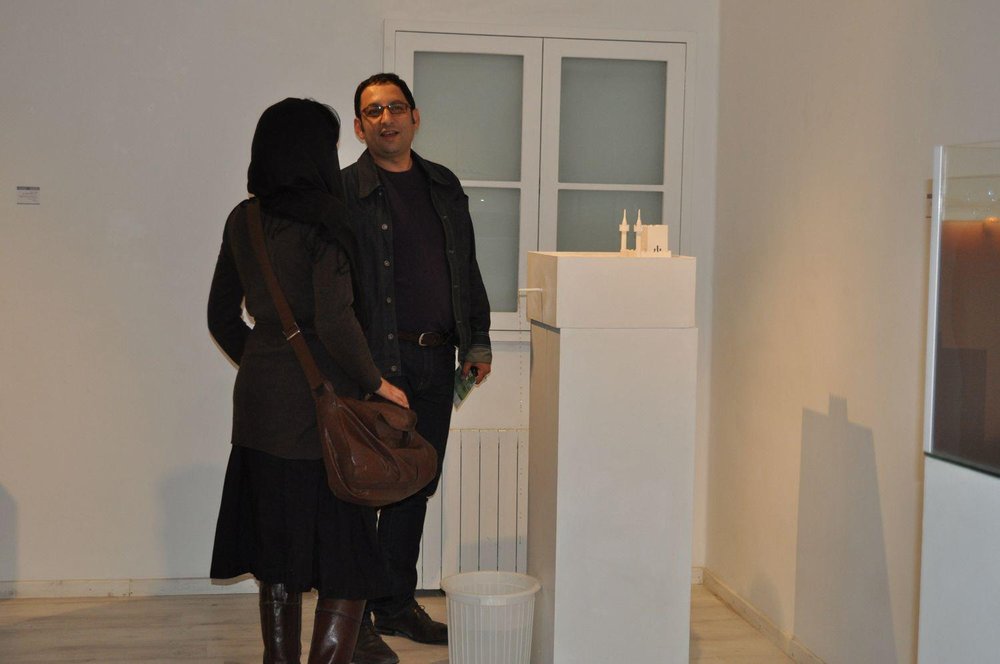 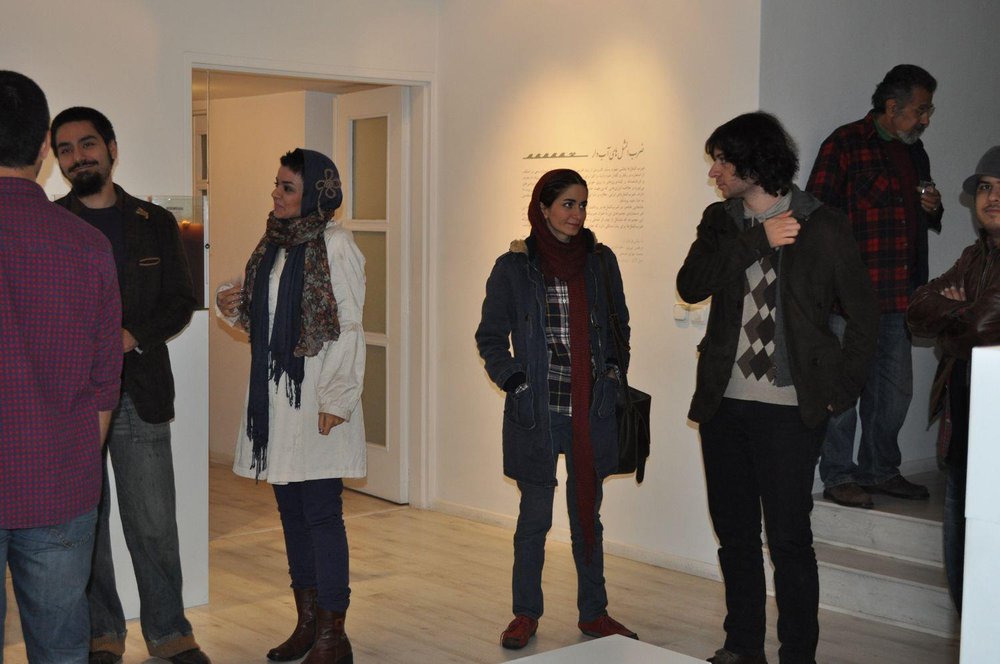 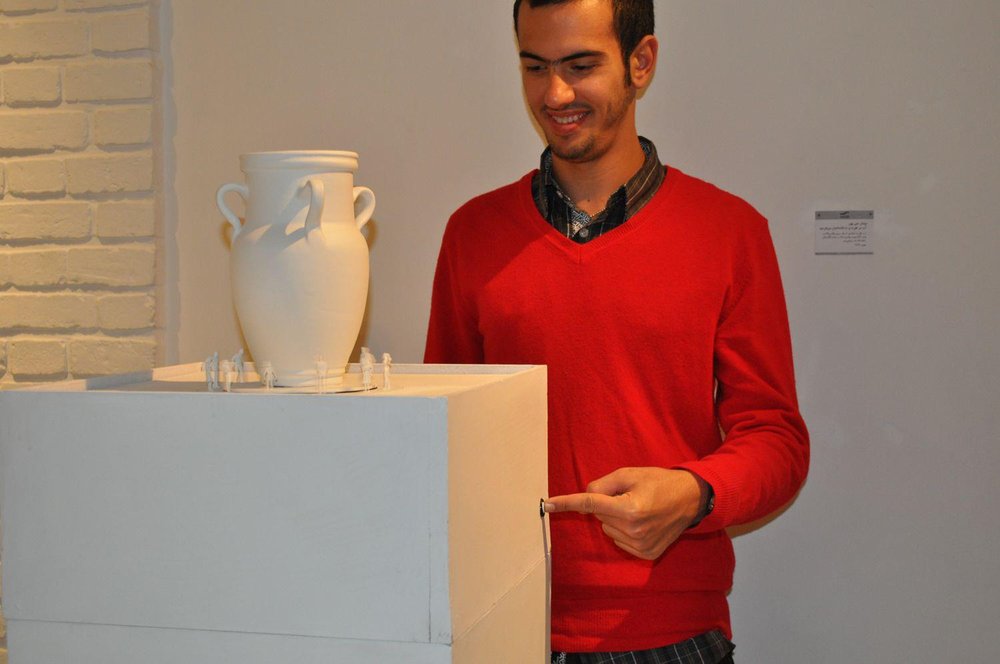 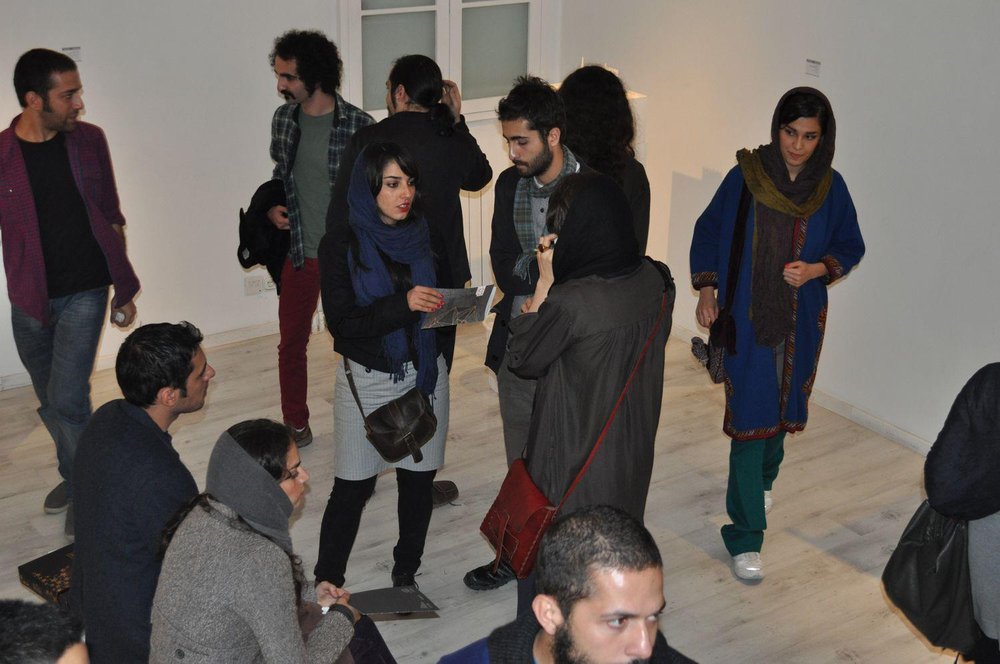 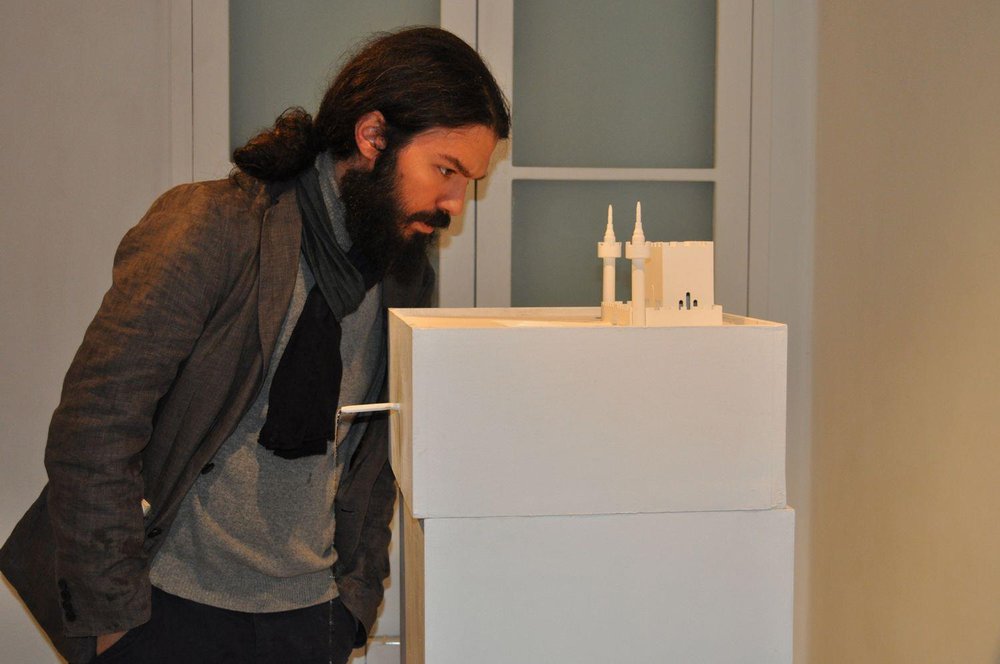 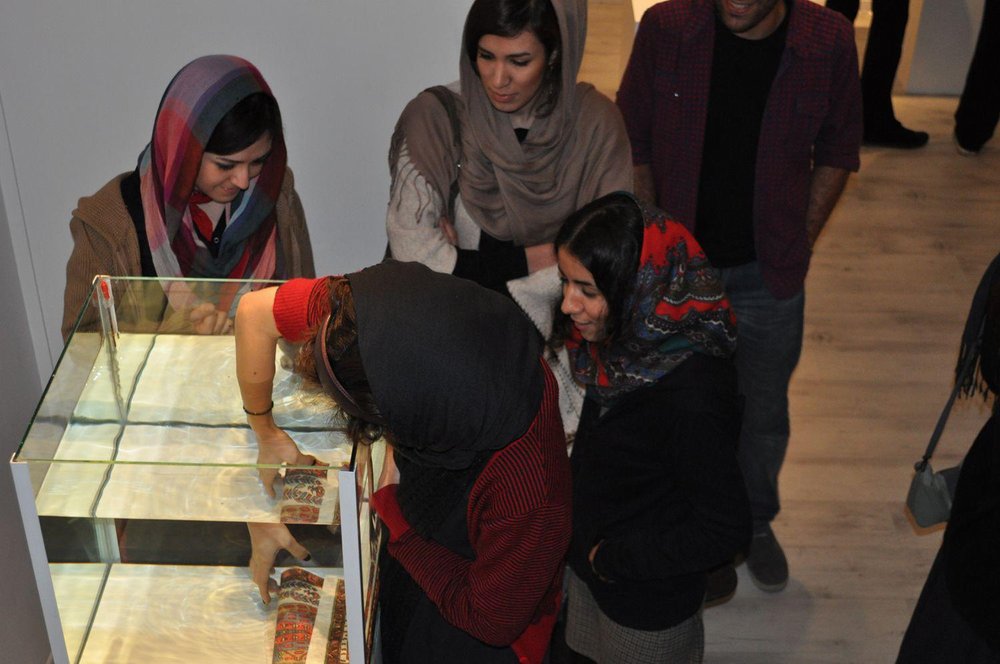 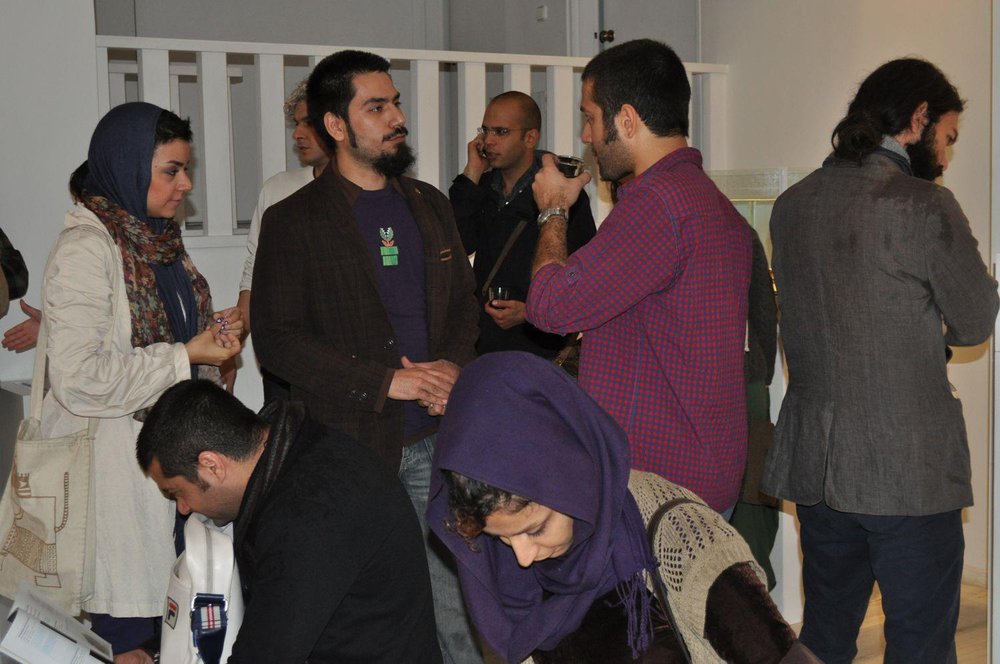 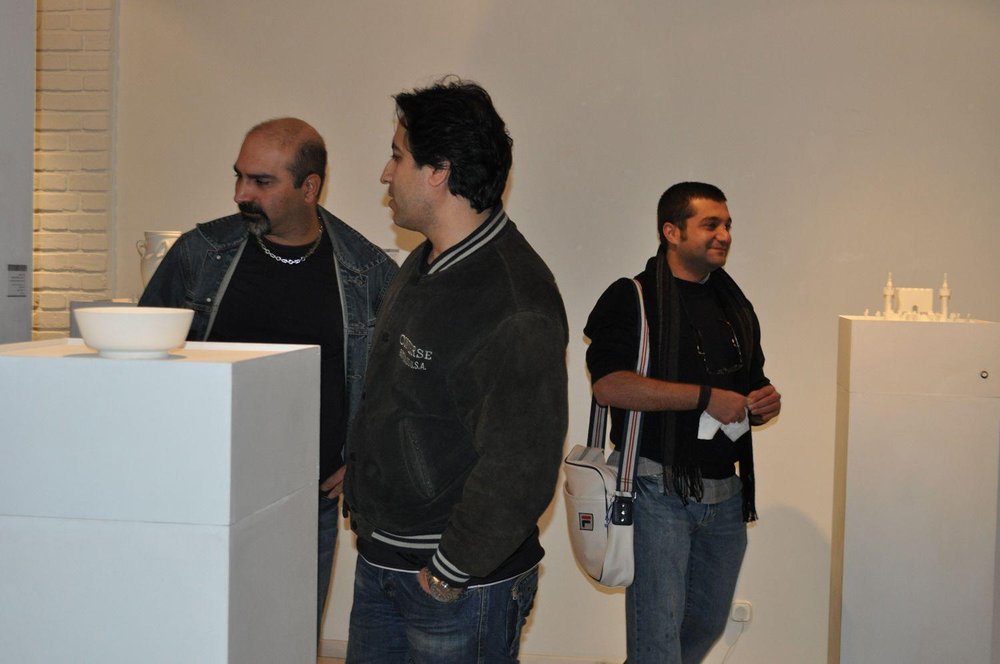 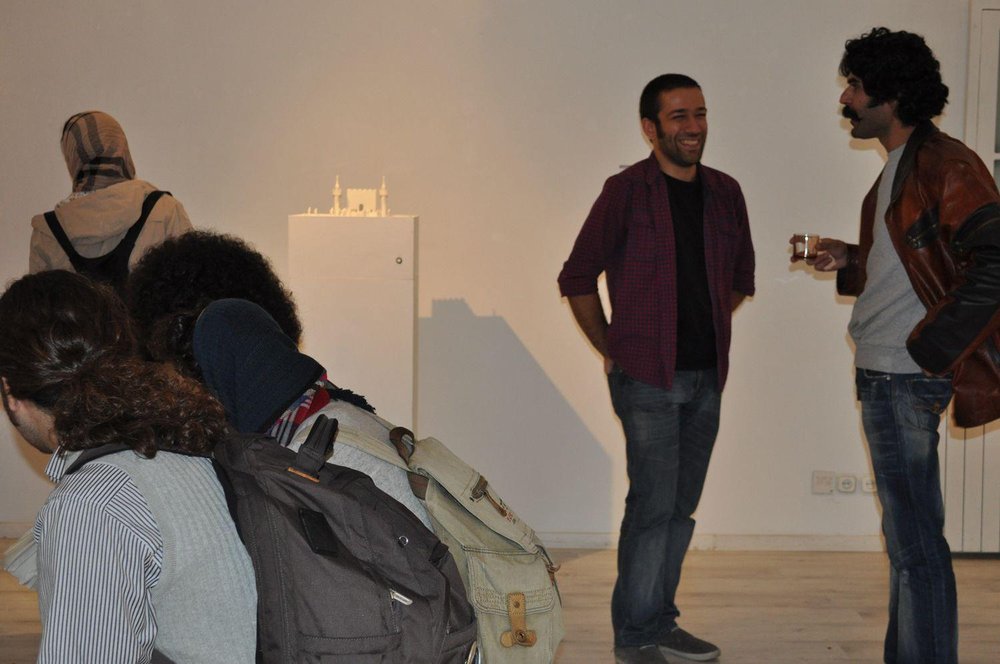 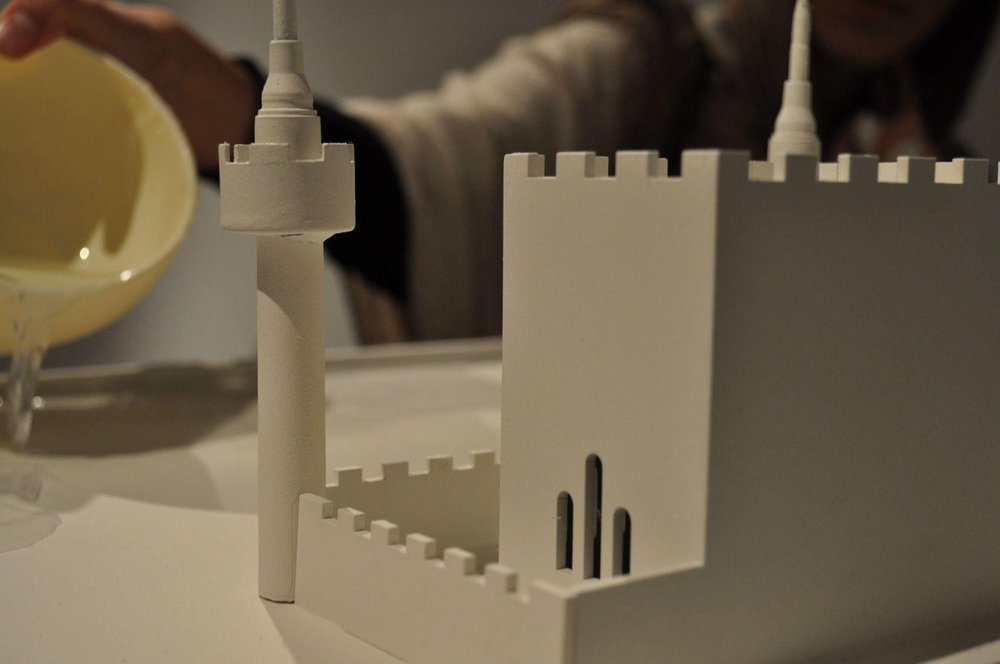 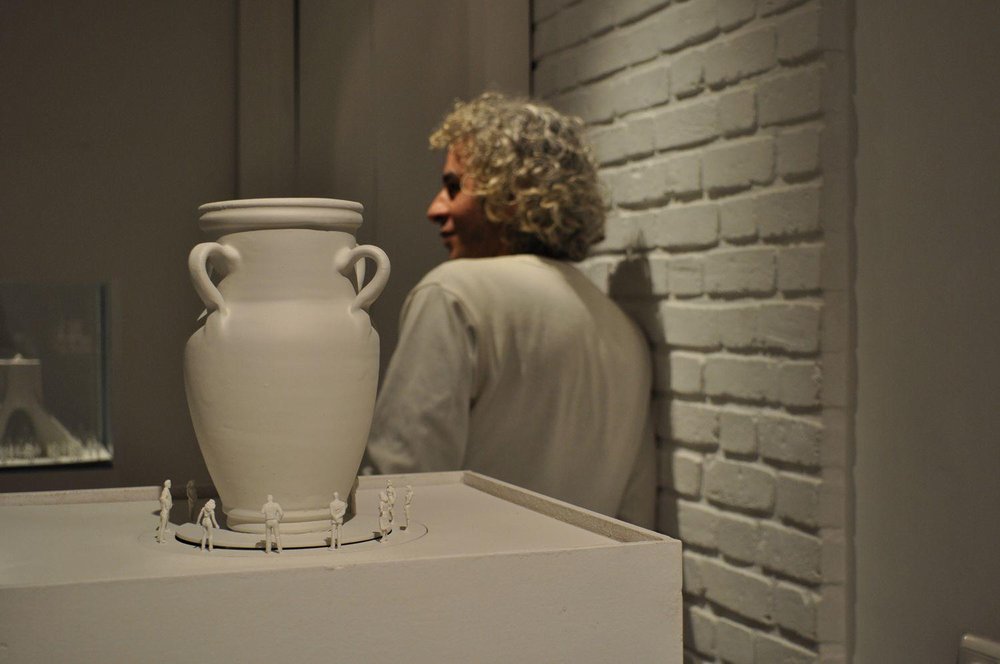 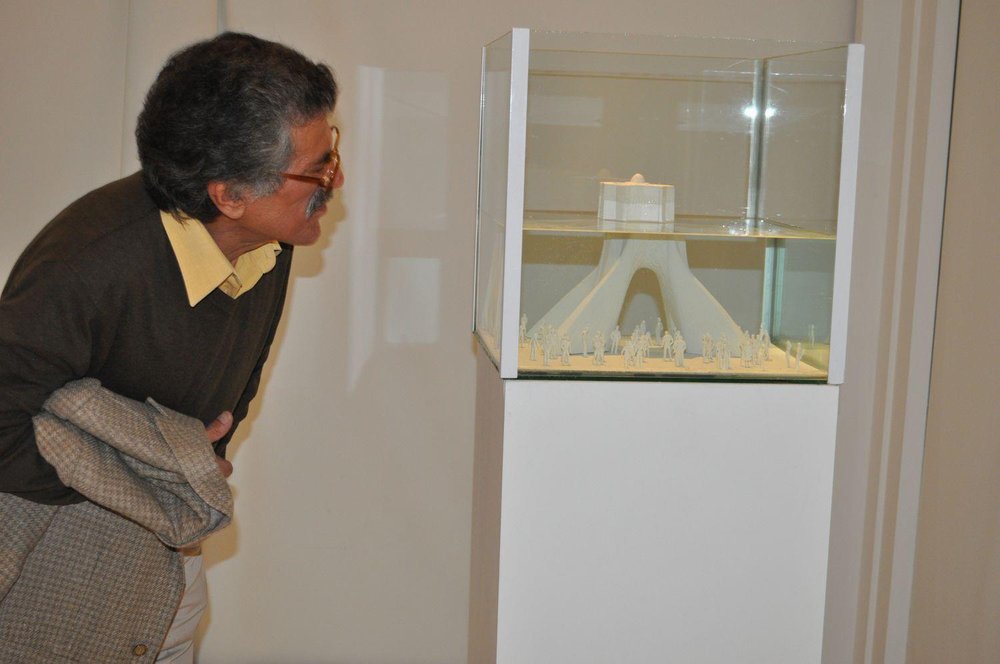 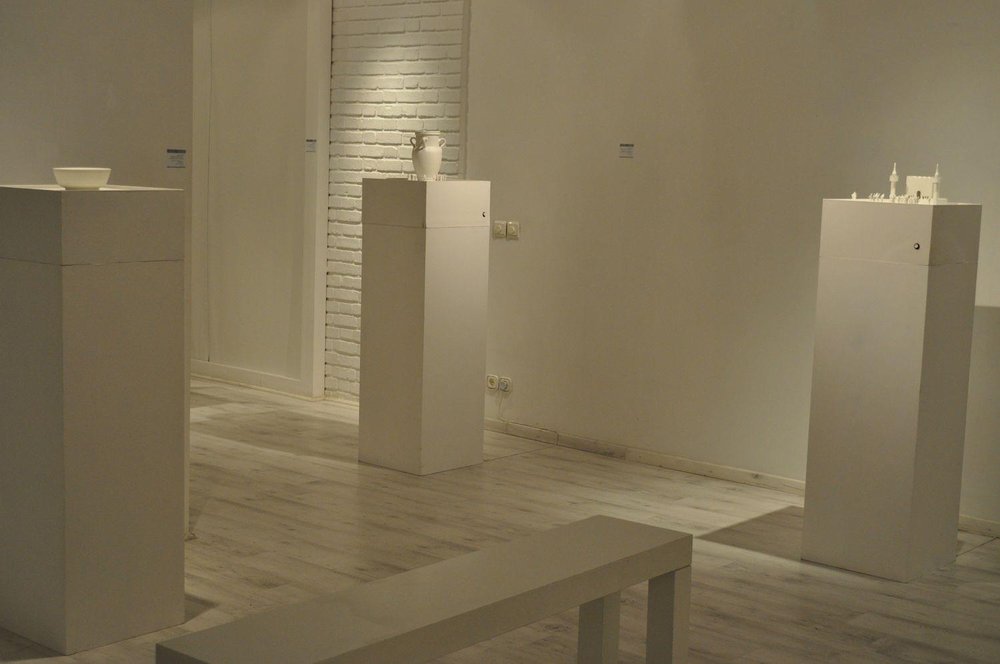 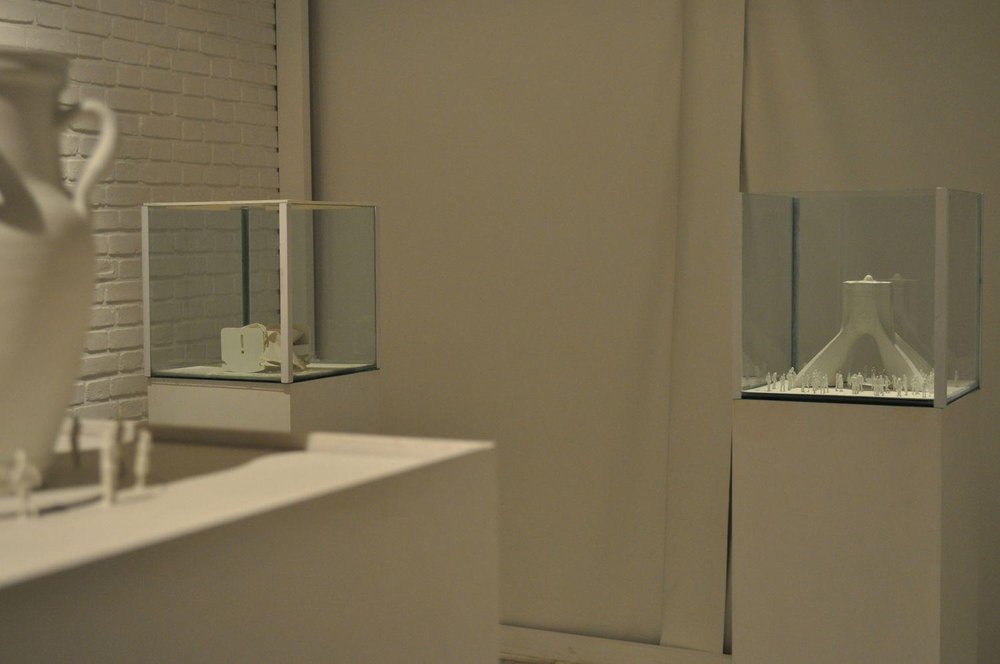 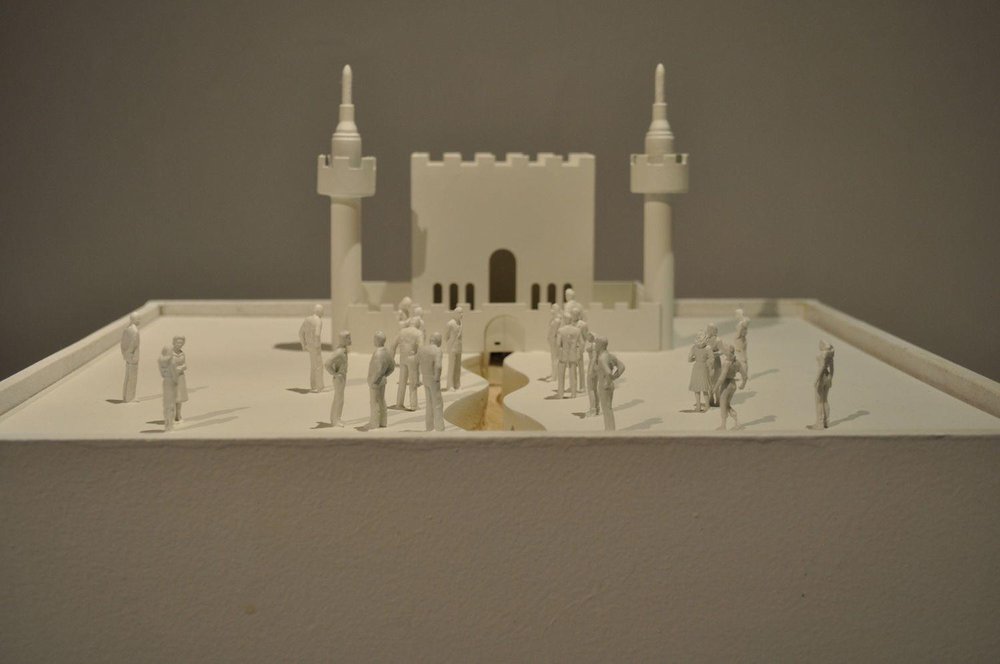 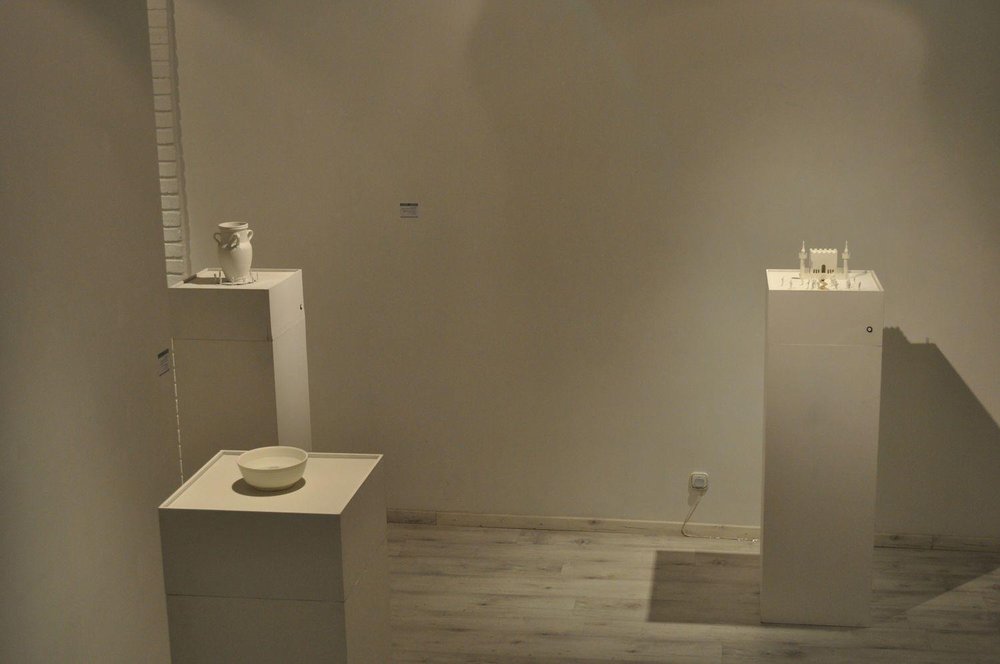 “… Without any doubt, these installation/sculptures are one of the most creative and memorable artworks of Iranian proverbs turned into presence with a unique and innovative approach, with a modern and contemporary performance, carrying a socialistic approach. In his works one can find metaphoric games and a critical point of view of Iranian’s major issues, Iranians who still express many of their concerns using hidden metaphors, and advising words.”

“… At the end of the Gallery 2 one work strikes the attention, at first due to its unusual formal qualities. Upon further scrutiny its clever interpretation of the traditional Persian proverb, makes one think again and maybe smile. The sculpture by Pendar Nabipour entitled Water will not even slide over water, 2011 is an example of strange objectivation of a metaphorical expression. The original proverb, which is the title of the work, usually is used to state a situation which is unstably silent and in which nothing happens. In this case, however, the situation referred to in the work is clear – a model of Azadi tower surrounded by numerous figures of people is an obvious connotation of the 2009 protests, great hopes for change that resulted in profound disappointment. Yet, the formal solution of the work is rather curious. The actual sculpture in placed in the tank half filled with water that covers the tower up to about two thirds. Because of the optical illusion created by the water surface the remained top part of the tower seemed to have shifted, or more precisely have slid above the water. This unexpected contradiction with the title, all of a sudden, turned the sculpture into a sarcastic charade and gave a sparkle of hope for the future. Despite the fatalism of the proverb and the political circumstances the curiosity of the artistic inquiry will, with no doubt, produce new modes of expression and take Iranian contemporary art further to new aesthetic solutions.”

part of a review by Daria Kirsanova on the exhibition “Elephant in the dark”.